From the “India!” Department:

The power of John Hughes’ de-coolifying ray was something to be reckoned with. He trained it on a Scottish, Velvets-influenced rock group, founded in 77. And he trained it on an English, Velvets-influenced rock group, founded in 77. Ok, perhaps in the case of Simple Minds, the lads had already strayed from the rough guitar-based early songs like “Chelsea Girl” and towards this while New Romantic thing by the time of “New Gold Dream 81-82-83-84”, a more commercial, but still nicely turned out record. With a Herbie Hancock guest appearance, no less (remember, this is Rockit-era Hancock). None of this was crime enough for Simple Minds to earn the fate of forever henceforth being “that band from The Breakfast Club”.

In the case of the Psychedelic Furs, the punishment is even more out of line with the crime. Especially when you think of that first album. If I wanted to give someone an idea of what post-punk sounds like, I might play “India” for them–a perfect example of the genre and my first and still favorite Furs tune. Just listening to Richard Butler’s rasp gives you the vicarious thrill of smoking a pack of Marlboros. What are the dangers of second-hand voice?

Whatever cool that had been left was threatened severely by the Venue where we caught the Furs the other night: B.B. King’s. The billing had mentioned dance floor/standing room with seating at the sides. But when we got there, it was all seating, with SR at the bar. This format works, it really does, for Jazz, and for Standup Comedy. But for rock? There’s a definite feeling of “Jamie Farr as Willie Loman” at the airport dinner theatre. But the seats were good, the site lines were good, and we were right behind the console, so we were constantly checking the set list to see what was coming up.

Seated with us were some very nice, friendly, chatty masters of the universe. They work at the Wall Street company that just posted the largest profits in Street history. Given that they were probably both pre-occupied with that ultimate bonus-time dilemma–yellow or red?–it was a fun, racous table.

And the set was fun, but honestly, much more like a bunch of friends getting together for a jam than a real gig. Two numbers had false starts–including “Love my Way”! The band was loose and ragged. The couple of tunes they played off Mirror Moves suffered the most. It didn’t help that the band was constantly running to the side of the stage to yell nasty things at the stage mixer. John Aston’s guitar sound was–not nice. And not nice at 100 Watts is not nice. The keyboard player alternated between two facial expressions: “oh my God, my entire rig is broken,” and, “ah good, there it is… oh no it’s not!”

But all of this hardly mattered, it was such fun. Butler spins like a top, strikes humorous attitudes, and has a whole system of semaphore that he uses to illustrate the lyrics. There’s the koo-koo-head-spinning-finger for anything that involves thought, the mind, etc. There’s the jerk-off-wrist, which accompanies things that are dull, a waste of time. His voice is still there, and he’s still got it in spades.

As the New Yorker informs us every week, “Musicians and night-club proprietors lead complicated lives; it’s desirable to call ahead to confirm engagements.” Looking at BB King’s website, it seems Eartha Kitt will do the New Year’s Eve show instead. (And if your eyesight is really good, you can see who we’re catching tonight at BB’s.) 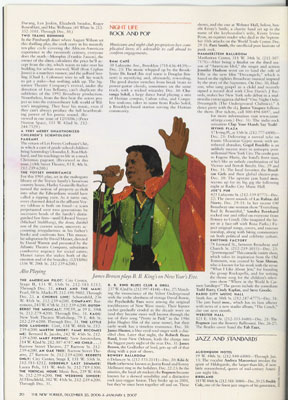 Reading through Eric Asimov’s year end wine wrap-up, I’m more interested his November state-of-the-union column about Rye whiskey. If you’ve never had a Manhattan made with Rye, then you’ve never had a proper Manhattan. Most people seem to prefer them with Bourbon these days, but Bourbon is a little too big and rounded, not sharp like a Rye (to put in in wine terms, if Bourbon is an Australian Shiraz, then Rye is a Rhone Syrah). Maybe we’ll stop off at Keens on our way to the show tonight…

Or play the game existence to the end;
of the beginning…

A couple of weeks ago, I woke up in Green Bay, Wisconsin, and this is what I was thinking. In Philosophy in a New Key*, Suzanne Langer writes about static form and dynamic form. For an example of static form, think of a Henry Moore sculpture. And one example of dynamic form, a waterfall: the drops of water are all moving, constantly shifting. But if you step back, you see a form that seems to be stationary. So that morning in the Fairfield Inn, I was thinking, “what about us?” We seem to be “things” and static, but isn’t that really just a form that emerges from constituent components that are constantly moving, shifting, shaping, changing. We are more like waterfalls than sculptures.

In The God Delusion, Richard Dawkins reminds us of the brilliant Mark Twain quote about death. “I do not fear death. I had been dead for billions and billions of years before I was born, and had not suffered the slightest inconvenience from it.” And then Dawkins goes on to suggest that we’ve had even closer experience of our deaths, that is ourselves in the past. Does the “I” who lived 20 years ago still live? 30 years ago? 40? Whoah, too far…

And on the subject of “I”, does that mean anything other than “present cognition plus memory”? Thought experiment: “you” and “I” switch “I”s. Would there be any difference at all? No, of course not. Perhaps we are all endlessly drifting from “I” to “I” every nanosecond, never repeating the same body twice.

Sometimes we like to think that the “I” is the little man inside watching the movie, and doing the commentary. But the little man would have to be blank, formless and non-individualized. All the content is in the movie, external to him, not in his little head-within-a-head. Otherwise, we would have an infinite regress of men-within-men.

*Mind you, this is just what I was thinking. She actually wrote about this in Problems of Art.

All day I hear the noise of sirens making moan.

And out of this clutter, you instinctively learn what to ignore and when to prick up your ears. There was a morning about five years ago when the sirens started and just would not stop. I already knew, in the shower, that something was up when I got the call to see what was happening on the teevee and out the front window.

Too close, too long, or both. It’s weird how many times NY’s bravest have visited our building and our block. Tonight, they arrived en masse to check out the steam coming out of the front of George N Antiques. The guys were toting their adzes, so I was hoping for some action. But after buzzing around like bees for no more than 7 minutes, they were off. No doubt to burn some books somewhere else.