If you wanted to give the Martian cultural ambassador a quick view of the differences between American and French cinema, you might start by showing a double feature of Rebert Bresson’s 1959 Pickpocket and Sam Fuller’s 1953 Pickup on South Street. Two films on the same subject–the travails of a pickpocket. One highly influenced by the other–can you guess which? And, wow, two completely different takes on the subject, two completely different approaches to casting and film-making.

Both movies share some common elements:
1. A guy, a girl, a cop
2. Nicely shot pickpocket scenes (including some ideas that Bresson lifted from Fuller)

But see if you can guess which movie is which. (Ambassador Kraglach didn’t do very well when we gave him the quiz before the screening.):
1. The pickpocket works alone.
2. The pickpocket works with a team.
3. The pickpocket rarely gets caught.
4. The pickpocket often gets caught.
5. Guns, guns, guns!
6. No gunplay.
7. The pickpocket lives in an improbable shack on the waterfront.
8. Dude lives in a garret.
9. Big name actors give broad performances.
10. Unknown actors give restrained, mannequin-like performances.
11. Action, action, action!
12. The most dramtic moments–the first arrest, the death of the mother, are completely elided. We go straight from the setup to the aftermath.
13. A commie plot!
14. No commies.
15. Microfilm.
16. Watches.
17. The girl gets shot by commies.
18. The girl has a baby.
19. The pickpocket has a moral transformation–he is not all bad since he refuses to be a commie.
20. The pickpocket has a moral transformation–the girl comes back to him and he realizes that he loves her.

How did you do? Both are great movies, obviously for very different reasons. But pairing films like this ultimately makes me yearn for the Americans to stray from the formulas a bit. For example, I wish a few American directors would realize the value of working with unknowns. In the Fuller pic, when Thelma Ritter gets shot, we are watching Thelma Ritter get shot, not Mo the Stoolie. Thinking about the new trend for Americans to shoot the exact same cast over and over again, I realize that this is in part driven by a desire for the directors to put a recognizable signature on their films–“Oh, there’s that guy and that guy. This must be a PTA flic.” Yuck.

The Pickpocket came out recently in a Criterion edition with an excellent introduction by Paul Schrader. Schrader tipped me off to the relationship between the two films, and also about Pickpocket’s influence on his masterpiece, Taxi Driver.

Headed up and to the left last nite to listen to some B3 grooves, and help out in some belated birthday activities. The venue was Smoke, an old-fashioned uptown boite de jazz. This place is what a jazz club should be, it’s small, has good sight-lines everywhere, good sound system, not too expensive (unlike those downtown tourist traps), nice vibe and comfy couches. And, as someone at our table pointed out, Smoke, sans smoke, is nice. (I could digress into a brief request that we pillory all those fools who screamed that banning smoking would kill the city’s night life–the place was packed, and not an iron lung in sight.)

As for the band, the Mike LeDonne quartet played them some good grooves. I was most impressed with tenor man Eric Alexander. This cat’s good. And he has that cool, serious, young jazz genius thing down, think Steve Dallas in The Sweet Smell of Success. In fact, Eric pretty much stole the set. I thought that guitarist Peter Bernstein would finally get his moment during a scorching slow blues–that’s guitar turf, man! But Bernstein is so intent on doing this quiet, unassuming melodic style, that he still held back. By the end of his solo, the blues had worn down to a funeral march. It was a weird moment. I liked his playing and loved his tone, but I wanted to hear much more. Peter, cut loose once in a while, you’ll feel good!

Holding court at the Roof Lounge tonight–the one truly great bar in Toronto. Sandra Oh and friends were at the next table, but the real celebs were sitting with us, namely composer-turned-pipe-organ-tuner JMS and Can-lit-crit gadfly and man-about-town BA. I know that Sandra is a devoted Cyberkrunk reader, so I didn’t bother her (like that tiresome other couple) with my idea: over the course of your next few movies, Sandra, please pummel to a bloody pulp the rest of the cast of Wings. Old Ernest would have appproved (and then he’d get drunk and forget all about it).

This guy flitted by to watch the scene on 59th Street. 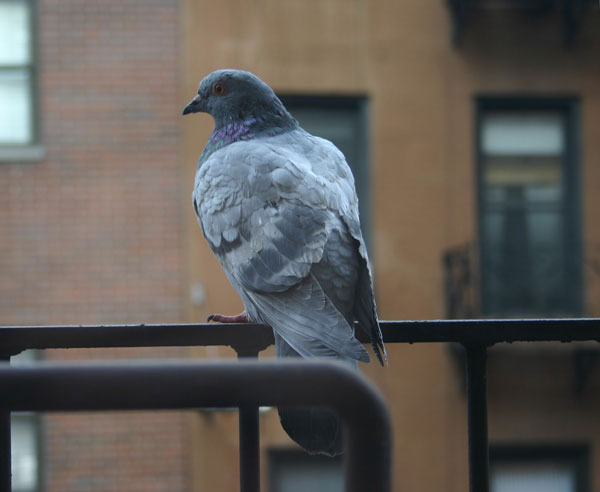 But little did he know that danger lurked nearby… 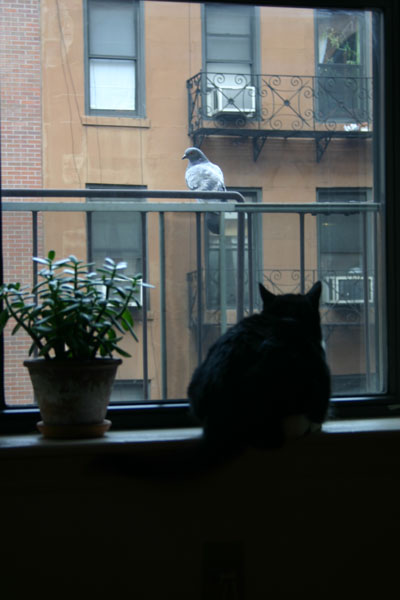 Billie quietly sez to me, “You hit ’em with the flash and I’ll jump through the window!” 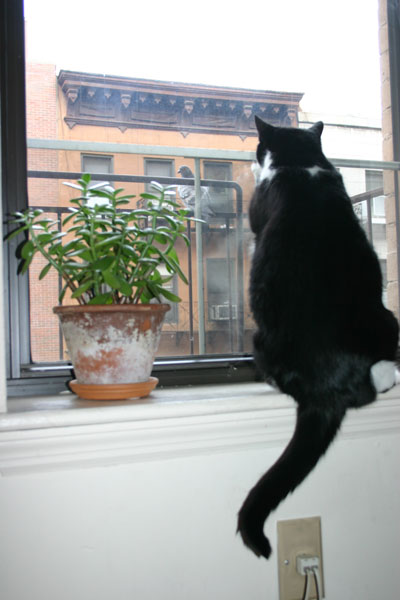 Just got back from seeing those Depeche-mode-playin’ gals at a newish club called Crash Mansion. Professor E. was crashed out on a couch as we checked out the opening act, a U2 cover band that doesn’t seem to realize it’s a U2 cover band. Ho hum. Violator hit the stage and this new iteration is the best one yet. This is the third guitarist I’ve seen them with, and she coaxed some nice textures out of her LP->Pod->Twin setup. PG’s bass sounded better than ever, with a nice Korn-like crunch. Tracy the drummer, whose birthday was the excuse for this here gig, rocked steady as ususal. Then t’was out into the cold street and into a warm cab to zoom back uptown and tuck the Prof into another cozy crash pad. As for me, I’m going to browse “How to play Bebop” for a while longer…