You would hardly notice it for lack of coverage, but thirteen years ago today was one of the most important days in the history of New York. On February 26, 1993, Ramzi Yousef set off a bomb in the parking garage of the North Tower of the World Trade Center. Yousef’s goal was to bring down the building, but instead he succeeded only in killing 6 and wounding about 1,000. This failure hardly deterred the men behind this attack. Eight years later, Yousef’s uncle Khalid Shaikh Mohammed and many others came and finished the job on the day that we now all know as 9/11.

In 1998, al-Qaeda set off synchronized bombs in the American embassies in Kenya and Tanzania, killing 258 and wounding about 5,000. President Clinton responded to this with several cruise missile strikes which, history has shown, were on a scale that was too small to disrupt al-Quaeda operations. In February of 1999, however, Clinton had an opportunity to strike at an extremely high value target: al-Quaeda leader Osama bin Laden himself. Intelligence had verified bin Laden’s exact location, and a cruise missile strike was perfectly feasible. They had the clear shot. The strike was abandoned however, because intelligence also showed that bin Laden’s hunting companions on that day included members of the Royal Family of the UAE.

The UAE was formed by a coalition of 6 Persian Gulf states in 1971, with a 7th added in 1972. Dubai is one of these member states, or emirates. The country has a population of about 3.5 million in an area less than the state of Maine. The UAE is governed as a federation, essentially run by the royal families of each of the emirates. There is no democracy there to speak of. The UAE, and Dubai in particular, is a both a financial and travel hub in the region. Dubai also served as both a financial and travel hub in the events of 9/11. 11 of the 19 highjackers entered the US from Dubai and half of the money used to carry out the 9/11 attacks was wired to the US from Dubai banks. In addition to this, 2 of the highjackers were themselves natives of the UAE. The UAE recognized the Taliban as the legitimate government of Afghanistan and does not currently recognize the legitimacy of Israel. (The last point troubles the Bush administration much less than the fact that Hamas does not recognize Israel.) In the immediate aftermath of 9/11, the UAE was, at first, less than cooperative with the efforts to track al-Quaeda money flows through the Dubai banking system.

It’s rather strange, then, that we now face the prospect of a company directly controlled by the government of the UAE operating six of our largest ports on the East coast. That company is Dubai Ports World, and the ports in question are New York, New Jersey, New Orleans, Baltimore, Philadelphia and Miami. And it should surprise no one that the Bush administration is now facing a heavy backlash over the idea of ceding management of the port of New York to a country indirectly, but inextricably, involved in 9/11.

How exactly did this come about? That’s the easy part. It is not, as some news reports almost seem to imply, the case that someone in the Bush administration woke up one morning and thought to himself, “Dubai should really be running our ports.” No, in fact it’s just a simple case of some global M&A activity: DPW is acquiring British-owned Peninsular and Oriental Steam Navigation Company, or P&O as it is known. P&O currently operates the ports in question. If the deal goes through, DPW would become the world’s third largest port operator (Hong Kong’s Hutchison Whampoa is number 1 and Singapore’s PSA is number 2). This deal is scheduled to complete on March 2, altough DPW has now agreed to a 45-day security investigation. DPW asserts that, even though the deal will have already been completed while the investigation is conducted, it will keep management of the American ports at arms length, leaving British executives to run them.

The fact that no one in the administration had the judgement to get in front of this issue should, again, surprise no one at this point. Instead, the sory was brought to light and framed by people highly suspicious of the deal, CNN’s Lou Dobbs chief among them. The Bush administration has become increasingly tone-deaf politically and through mishandling the response to this issue, risks losing broad public support for its stance on security, its strongest remaining political asset. And once again, we see that the White House has lost the unflinching, universal support among Republicans that had been its other chief asset. Indeed, several Republicans, including Representative Peter King of NY, have been among the most vocal opponents of the deal.

In all likelihood, the deal will go through. If nothing else, all this hooplah will at least serve to remind us that port security is one of the biggest challenges we now face. We should not need an imbroglio to remind us of this; the issue should already be front and center. But then again, we should not have to be reminded that 13 years ago today al-Qaeda first struck New York and we did too little in response.

I sure do love me some of that new Sedrick. Just downloaded an album’s worth of their new stuff here, and I suggest you do the same. Now! Cool thing is, this stuff was recorded on the new gear that we discussed here on cyberkrunk. And it sounds not too shabby. Hey Will, are we hearing any of that new Les Paul on these tracks? Thanks guys!

London, Ontario came to New York this week in the guise of Jazzabel, the one-woman (and three-guy) show produced by a trio known collectively as “Femme Fatale.” The show is the product of chanteuse Denise Pelley, author Jacquie Gauthier, music director & composer Jeff Christmas, and producer (and ex-high-school-colleague-of-mine) Louise Fagan. Londoners of note, all.

The show has been the buzz of the London theatre scene for a while, and the excitement leading up to the New York run was high. I missed the Gala opening and the opportunity to hang with the Canadian Consulate muckity mucks. Instead, I caught the show on a wickedly cold Saturday night, surrounded by an audience of imported Canadians, some of whom seemed to have just put down their martinis moments before entering the house.

The idea for the show is promising, if not Earth-shattering: in between sets of hot jazz from the ’30s and ’40s, two jazz singers, played by one woman, tell their story. The two singers couldn’t be more different. Grace is green, excited, a little afraid, and clean cut, if not a complete square. Jane, who becomes Jazzabel, is hard-living, substance abusing, rather tragic. Parallels in jazz history are many. Ella and Billie are the quickest to come to mind, but if they were men, they could just as easily have been Bird and Diz.

As much as I enjoyed the show, and it is enjoyable, it did not completely hit the mark. I’ll talk about the music first. Jazz is, we all know, an improvised art form. When all the parts are written out, solos and all, you get something out that isn’t quite jazz. It’s jazz-substitute, processed jazz food, an edible jazz product. But it’s not jazz. Christmas actually did an admirable job on the arrangements. But the band could have really cooked if they had run though his charts once or twice and then tossed them out. Denise Pelley’s voice is great. No problem there at all. The artifice of the show had her a bit too removed from the boys in the band. I think that the intent was to show that the sidemen weren’t really on the stage with, that they were in the pit or something. Again, jazz is all about communication, people listening and interacting with each other. In such an intimate setting, her lack of contact with the band was a little unsettling.

The script has some issues, too. While I buy the story line, Gauthier’s dialogue, or monologue, I guess, doesn’t sell it. Big, long sentences that don’t always ring true. Here’s another radical idea: letting Pelley internalize the script and then throw it out would help. More improvised music, more improvised story-telling, less constraint, and in short, more jazz.

It was one for the history books, although it really didn’t feel that much bigger than some of the storms we’ve had in the last few years. And nowhere near as dramatic as the blizzard of 1996. In fact, it was a nice quiet Sunday, perfect for heading down to the Strand for some book browsing.

Update: And reading the Times this morning, I see that while the snow was copious, it wasn’t violent enough to meet the criteria for a blizzard, at least not here in the city. The Times article ends with some lovely, poetic writing:

For many indoors, it was a day to relax by a window, perhaps with a glass of wine and soft jazz on the radio, and take in the unreal loveliness of winter — the panes frosted like glass from Murano, the sills drifted with flourishes of lacework, and, out in the storm, dreamscapes of snow blowing down a street, curtains of snow falling in great sweeps, snow settling like peace in the parks and skeletal woodlands.

The view from the front yard. 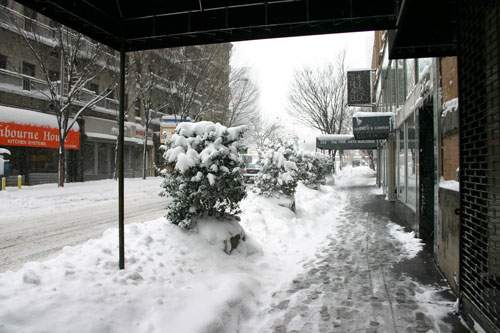 There’s a car in there somewhere… 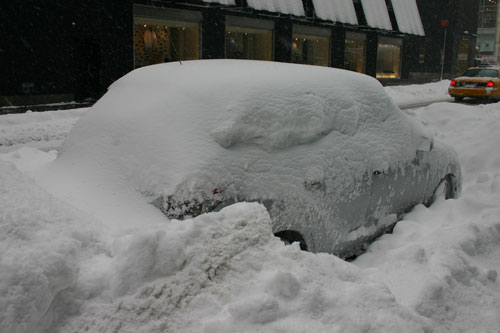 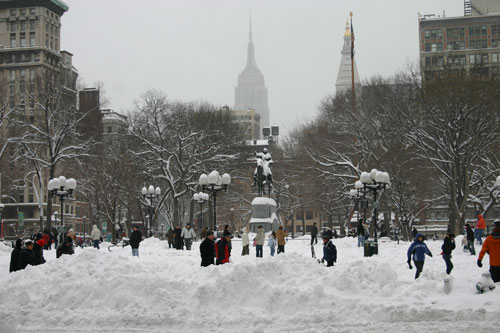 Back on the East side and the sidewalks have been plowed. 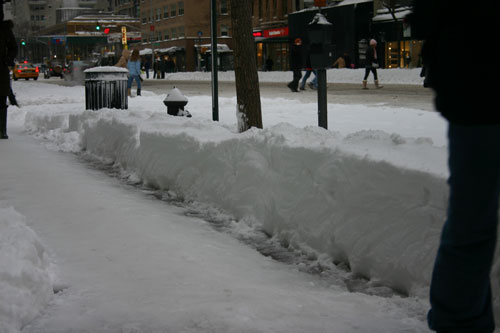 Two of me blog mates have been pondering Starbucks lately, so I’ll join in the fun. There’s no doubt about it, the Starbucks system of nomenclature inspires confusion and more than a bit of rebellion. DB can’t bring himself to utter “Grande” and asks for a medium instead, to the consternation of his “Barista”. Here in New York, you are apt to hear people trying to order a “Vente”. Not “Venti” (as in Italian for 20, as in it’s a 20-ounce coffee, so what is so confusing about that?) but “Vente”, suckered into a false rhyme by the aforementioned “Grande”. Of course “Tall” starts to make sense when you think of it in terms of a long espresso. (And it’s been a long while since I’ve heard “expresso”, oddly enough.) Where I draw the line is ordering a “drip”. No, for me it’s a “Venti coffee” in the morning and, if I’m so inclined, a “Tall red-eye” in the afternoon.

The red-eye (on no Starbucks menu anywhere, but they know about it in every city–try it!) is a bit of an approximation of the special undergrad brew I used to tote around the UWO music faculty in a thermos. It was a full pot of good dark roast French press coffee topped off with a small pot of espresso. I was a tad intense back in those days.

And before that was PT and his famous “musico coffee” that he would brew for his band-mates. To give you an idea of what that was about, it was based on instant coffee and came in three grades: musico regular, musico strong and my personal favorite, musico paste.

And if we reach back even further we find me and the self-same DB drinking strong black coffee back in the eighth grade. I was already into the coffee, but it was DB who showed me how well it went with peanut-butter toast. (Ask us about the great “egg-off”.)